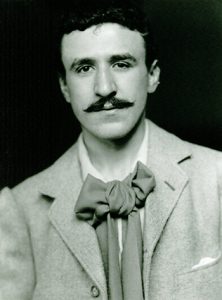 At the Age of 25, Charles Rennie Mackintosh was employed as a draughtsman by architects Honeyman & Keppie, who had been engaged to transform the two adjacent townhouses into the Glasgow Art Club's new Clubhouse in 1893 and the construction of the Club's large Gallery on the two back gardens.

Charles Rennie Mackintosh was responsible for the design of many of the internal features of the Club including the frieze in the Gallery.

Some examples of his work, which can be seen at the Club are shown in the photo gallery below:

Sketches of the interior scheme for the Club drawn and signed by Mackintosh were published in the Bailie, a Glasgow magazine, on 7 June 1893. The sketches also bear Keppie's name: he was named universally at the time as architect of the project. It seems that while Keppie was in charge, Mackintosh contributed to the work, but the extent of his involvement is not entirely clear. Details that suggest Mackintosh's input are the pierced ventilation grates; unusual form of columns on the chimneypieces, which are repeated in contemporary John Honeyman & Keppie work at Craigie Hall; and the clockface of the W. chimneypiece, which has similarities with a clockface design for the Canal Boatmen's Institute, published in the British Architect in 1895.

In his 1891 North Italian sketchbook, Mackintosh made two undated, but later, sketches showing aspects of the Art Club interior almost identical to the finished form: the carved newel post and classical arches in the entrance hall and a set of doors and fretwork covers for ventilation ducts in the gallery. Although the sketches suggest that Mackintosh designed these elements, because they are not dated it is not known at what stage of the design process they were drawn, meaning they cannot be definitively attributed to Mackintosh. It has been suggested that the design of the gallery doors may have been based on a bed sketched by Mackintosh at the Museum van Oudhden in Antwerp towards the end of his Thomson Scholarship travels.

Both the drawings in Mackintosh's North Italian sketchbook and the sketches published in the Bailie suggest that a frieze of curvilinear, probably organic, forms decorated the upper section of both the gallery and the entrance hall walls. The existence and design of these friezes, particularly in the gallery, has been investigated in recent years. Descriptions contemporary with the opening of the Club suggest a light colour scheme throughout the building. The Evening News described the colouring of the 'large gallery' as 'especially notable, the walls being terra cotta with ornamented frieze and wood-panelled dado'. The Evening Times reported that the 'wall-painting etc is all in quiet tones – creams and delicate greens predominating'. Unfortunately, the photograph of the gallery published in the Graphic is not of sufficiently high quality to show any patterning on the upper part of the wall. Scientific analysis of plaster samples from the frieze area undertaken by Historic Scotland in 2004 concluded that the 'earliest design scheme was revealed to be a yellowy cream colour with elements in yellow, a pale pink and pale green.'

The original gallery frieze must have been relatively restrained, for when Keppie was consulted in March 1911 on the apparently long-held notion of installing a frieze of casts of the Elgin Marbles in the gallery, he expressed serious doubts about the appropriateness of such a frieze in relation to the 'general architectural scheme' of the gallery, and the detrimental effect it could have on exhibitions of work displayed there. He also drew attention to practical issues associated with a frieze of casts. The artists' meeting discussed the idea further, but voted against.

Photographs of the Art Club entrance hall, dining room and gallery published in the Scottish Field in December 1913 show that the original colour scheme in the gallery had been maintained: the principle wall colour was quite dark, perhaps still terracotta, with the light-coloured frieze area above. The quality of the photograph again precludes the secure identification of the frieze design. 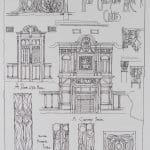 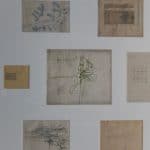 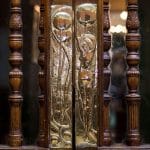 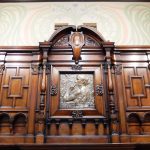 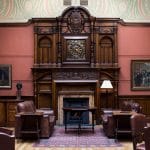 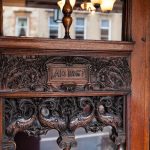 Door to the Glasgow Art Club Showing the Founding Date 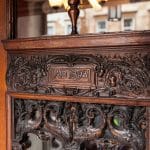 Fretwork cover of ventilation duct incorporating the letters G, A and C 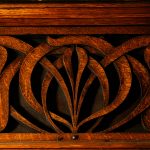 Wall Ventilation Grate in the Gallery 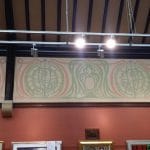 Details of the Mackintosh Frieze in the Gallery