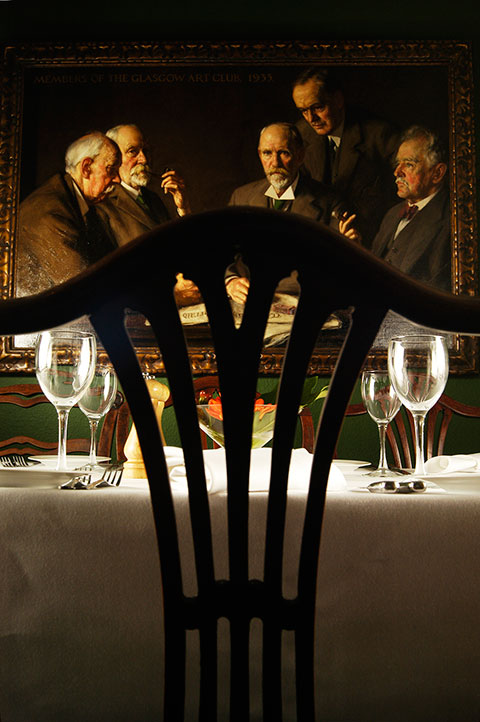 The Glasgow Art Club, which has occupied its existing Bath Street premises since 1893, was founded in 1867 by  William Dennistoun, a young amateur artist who had been forced by ill health to leave the city. On Saturdays his friends went to see him at his cottage in rural Old Kilpatrick to draw and paint together. Dennistoun proposed that they should form an art club. He and 10 others, all amateur artists, held preliminary discussions  in a tearoom above a Candleriggs baker's shop before launching the club in the Waverley Temperance Hotel in Buchanan Street.

At  their monthly meetings each member would bring a painting, usually a watercolour, and the others would comment. At times there could be fiery disputes.

Membership grew in the 1870s,  professional artists began to join, and exhibitions were held. Not surprisingly, the limitations of a temperance hotel began to be felt and in 1875 the club moved to a Sauchiehall Street hotel, also called Waverley, where something stronger than tea was to be had and annual dinners could be held in suitable style. A little later,  rooms were rented for six months at a time in the Royal Hotel, George Square. Life classes were held and occasional sketching classes.

It was time for the club to find a place of its own, and in 1878 it moved to 62 Bothwell Circus and despite the depression following the City of Glasgow Bank failure, enough money was raised from the sales of paintings to help pay for the rent and furnishings and to hire a houskeeper.
The continuing need for cash, however, helped to propel the club towards a critical move - the admission of lay members, which in any case was in tune with Glasgow's awakening interest in the arts.

This proposal was strenuously resisted at first but by the mid-1880s the painter James Guthrie was among influential members arguing successfully for change and male lay members began to be admitted, although women had to wait until 1983.

To accommodate all the newcomers the club rented a new home at 151 Bath Street but this in turn was soon found to be cramped. It was time for Glasgow Art Club to buy its home.

Two adjacent town houses were bought in Bath Street. John Keppie, already a member of the club, was put in charge of their conversion and he also created an adjoining gallery in the small back gardens. There is recent evidence that the young Charles Rennie Mackintosh had a hand in some of the gallery's ornamental details.The scene was thus set for countless dinners, dances, concerts, lectures and not least, exhibitions.

A short history of the first 100 years of the club, on which much of the above account is based, was written by the late J.M. Reid in 1967.

Artist members of times past included James Guthrie and E. A. Walton, along with several other Glasgow Boys, although the pioneers of this group had initially been refused membership. Fra Newbery, the colourful head of Glasgow School of Art, was a member, as were many of his successors.