A Blast from the Past!

A BLAST FROM THE PAST

A donation of some 137 back catalogues from the RGI’s Annual Exhibitions has been presented to our Archives at the instigation of RGI Past President, Karin Currie, with the endorsement of fellow PPRGIs Gordon Macpherson, Evelyne Anderson, Kenneth Chrystie, Eric Hagman and Lord Macfarlane.

While the RGI’s main Archive is held at The Mitchell Library, and accessible to members of the public, an assortment of additional past Exhibition Catalogues had been languishing for years in storage, very much out of sight and out of mind, as Karin had discovered. 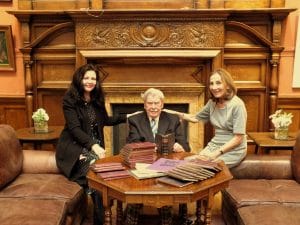 Lord Macfarlane – currently both Honorary Vice-President of the RGI and a Trustee of the Glasgow Art Club – with Angela Fussell and Karin Currie.

Much shared heritage links the RGI (founded 1861) and the Glasgow Art Club (founded 1867); historically both have played a pivotal role at the core of Glasgow’s vibrant art scene throughout a century and a half. With these catalogues now to hand, members have an opportunity to dip into that history.

Archivist, Angela Fussell, says: This is a substantial run providing an extremely useful addition to our archive holdings. The catalogues range from 1877 to 2013, with invaluable information on who, when and what was exhibited. Some include images of a selection of works and, notably, a photograph of the Council and Hanging Committee for the given year.

Please get in touch with me if you would like to see what we’ve got! e-mail: archives-library-af@glasgowartclub.co.uk

Do let us know!