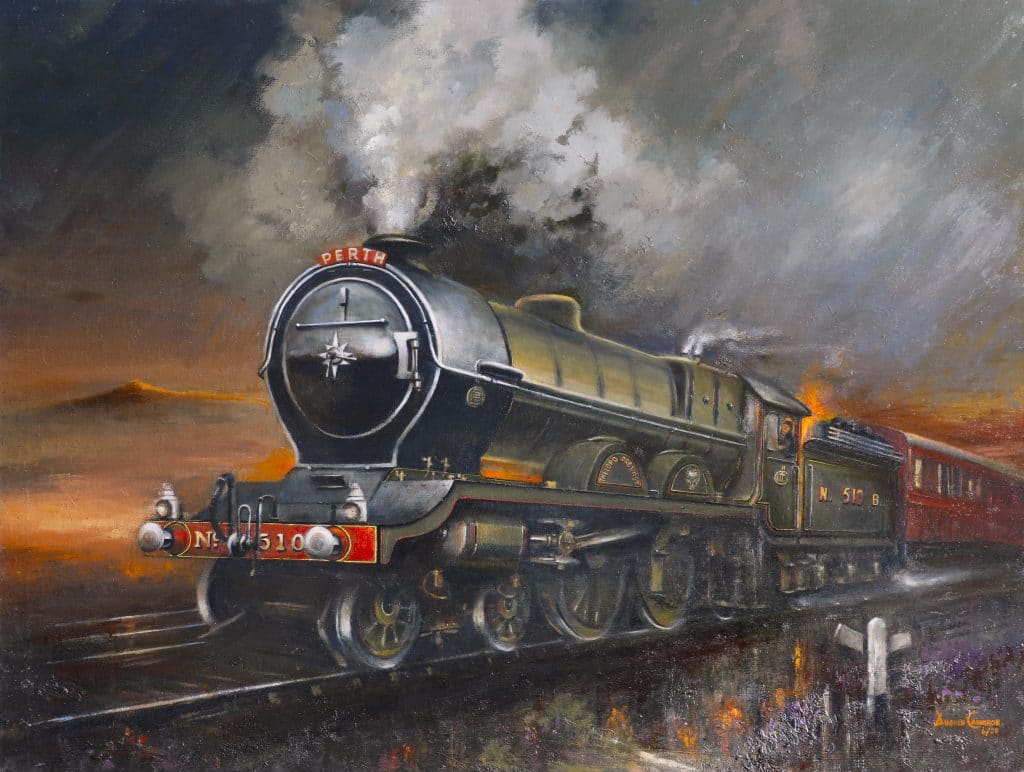 “Quite apart from my professional activities as an industrial designer and academic I have been fortunate during my life to have been sustained by my enthusiasms for railways and aviation and expressing them in drawing and painting-pity the poor soul who is bereft of enthusiasm! The civilised world, in my view is made by – Enthusiasm, Eccentricity and the pursuit of Excellence.”

The NBL Atlantics were designed, largely by the North British Railway and built, sixteen by North British Locomotive Company in Springburn in 1906 and six, by Robert Stephenson & Co, Darlington in 1911 and the final two by NBL in 1921.

Number 510, The Lord Provost was the last, built, at Hyde Park, Springburn, works No 22690 – withdrawn by the LNER in 1936. They were mightily impressive in appearance and in performance. It was intended to preserve one as they were all withdrawn in the 1930s and Midlothian LNER,9875 was selected and even restored at Cowlairs in 1938 and returned to traffic but after the outbreak of WW2, was quietly scrapped in November 1939, alas.

We should build one anew!

Dugald Cameron was born in Glasgow in 1939. He spent his early life in Yoker/Clydebank, followed by Larkhall and East Kilbride. After marriage Dugald and Nancy moved to Skelmorlie where after nearly fifty years they remain.

After trying a few things for a few weeks Dugald enrolled in the Junior Non-Diploma course of Glasgow School of Art in January 1957. After the two -year general course he specialised in industrial design gaining the Diploma of Art and Design in 1961 followed by a year’s post-Diploma,1962.

Dugald began freelance design practice combined with part-time teaching in industrial design at GSA, the latter from December 1962. Dugald was involved in the design of the first commercial medical diagnostic ultrasound scanners at Kelvin Hughes and worked for over forty UK and American companies as an industrial designer in parallel with teaching.

In 1971 Dugald became senior lecturer in-charge of industrial design at GSA, followed by his appointment, in 1982, as Head of school of Design and Craft , Later, in 1987, he established a new B/M Engineering, product design engineering in association with the University of Glasgow. In 1991 Dugald was appointed Director, GSA, a position he kept until his retirement in 1999 having taken on The House for an Art Lover. Thereafter his positions and appointment taken on:

Dugald Cameron is a Fellow, Chartered Society of Designers, Companion, Royal Aeronautical Society, and Fellow of the Institution of Engineers in Scotland.