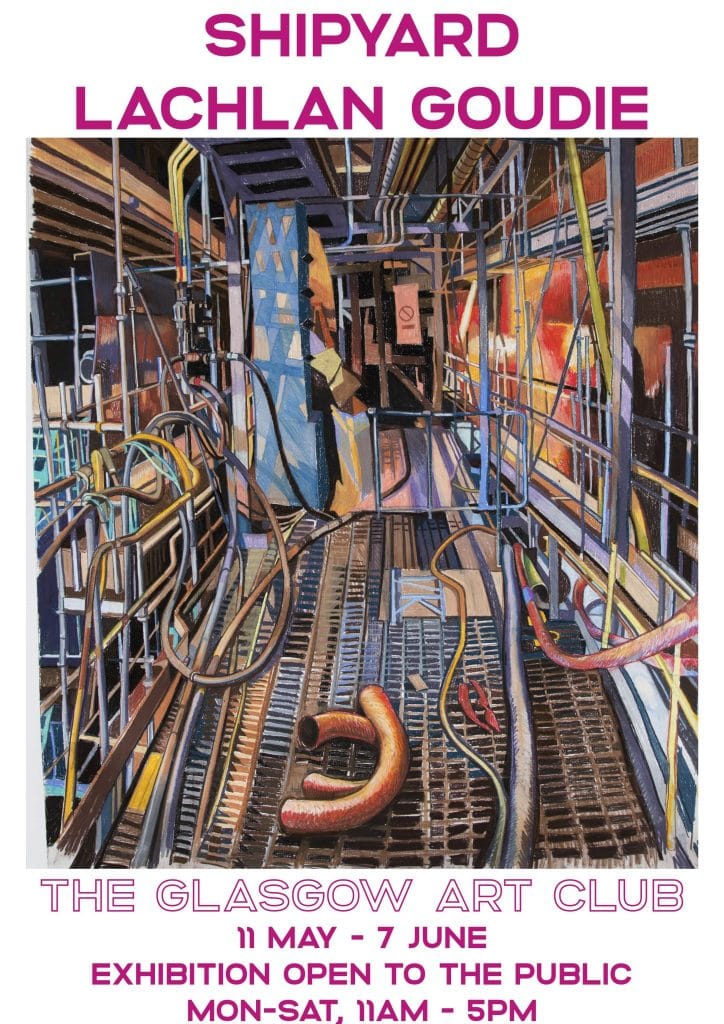 Lachlan Goudie has spent seven years documenting the construction of several ships at the Govan BAE Systems shipyard, including the last vessel to ever have a traditional launch on the slipways of the Clyde, HMS Duncan.

Shipyard features over 70 artworks which document the assembly of the next generation of Britain’s naval vessels including the vast Queen Elizabeth class aircraft carriers.

Drawing on hundreds of images Goudie created at Scotstoun, Govan and Rosyth between 2009 and 2016, the artworks range up to 3m x 2m in size and across a wide range of mediums. These include oil and gouache paintings, pen and ink drawings, sketches, sculptures, wood cuts and large charcoal portraits 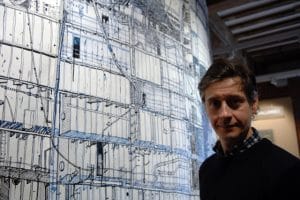 The Glasgow Art Club
185 Bath Street
G2 4HU
Preview: 10 May, 6pm – 8pm (speeches at 6.30pm)
Exhibition Runs: 11 May – 07 June
The Glasgow Art Club is thrilled to announce that Shipyard, a solo exhibition exploring contemporary shipbuilding by Lachlan Goudie will open to the public at 185 Bath Street on Saturday 11 May 2019.
Shipyard is a remarkable exhibition capturing the work, vibrancy and renewed optimism at shipyards on the Clyde and Forth, created by renowned Scottish artist, and broadcaster, Lachlan Goudie.
An unprecedented artistic exploration of contemporary Scottish shipbuilding across a range of different mediums, Shipyard draws on hundreds of images Goudie created at Scotstoun, Govan and Rosyth over a seven year study between 2009 and 2016.
Around 70 artworks document the construction of the next generation of Britain’s naval vessels – the world leading Type 45 Destroyers and the monolithic Queen Elizabeth class aircraft carriers. Bringing to life both modern construction and the thousands of skilled shipyard workers creating these giant vessels, they range up to 3m x 2m in size and from oil and gouache paintings, pen and ink drawings to sketches, sculptures, wood cuts and large charcoal portraits.
Goudie first developed a fascination with shipbuilding whilst growing up on the Clyde. As a child, it was the past glory days of ‘Clydebuilt’ ships that captured his imagination, not the stark reality of industrial decline that he witnessed. Hence when construction on the Royal Navy’s newest and biggest aircraft carrier commenced, he was determined to document the monumental engineering project and record modern shipbuilding.
Lachlan Goudie, born 1976, is following in his father’s footsteps as a painter himself as well as writing and presenting the BBC television series The Story of Scottish Art (2015) and presenting a BBC documentary celebrating the 150th anniversary of the birth of CR Mackintosh (2018). Lachlan is currently a judge on the popular BBC television series, The Big Painting Challenge.
Lachlan’s father, the figurative painter Alexander Goudie was an active member of the Club. Lachlan shares some of his fond memories of GAC as a child:
The Glasgow Art Club featured prominently in my childhood.  My father was a member during the 70s and 80s, a period when the membership included some of the most celebrated, rumbustious and opinionated artists in Scotland.  I loved nothing more than sneaking in with my dad and watching him play snooker with his friends or settling myself into the leather armchairs and listening to him chat raucously over a whisky and through a cloud of cigar smoke.  I remember the club as an exciting and boisterous place, an establishment that reverberated with the memory of all those great painters, sculptors and architects who helped create its unique atmosphere.  The club is a cradle of artistic tradition but also, inevitably, of creative exuberance, experiment and unconventional characters.  I am proud to be exhibiting in a gallery that was decorated in part by Charles Rennie Mackintosh and where my father himself exhibited on many occasions, alongside his distinguished contemporaries.
Entry to the exhibition is free. Public access Mon – Sat, 11am – 5pm
www.glasgowartclub.co.uk
END
For further information contact Naomi Brown, Marketing Manager naomi@glasgowartclub.co.uk / 0141 248 5210
High Res images available on request.
Lachlan Goudie available for interview by request.
Notes to editors
Lachlan Goudie shared the following about his experience at the shipyards:
“Shipyards are awe-inspiring places… the sublime sense of scale and energy, the furious and relentless pace of component panels being assembled into towering monuments of steel.
“There is noise, there is chaos and fire, there’s a visceral sense that you’re part of a vast, industrial organism that will spit you out of the way, unless you watch your step.
“As an artist, you hardly want to blink for fear that you’ll miss a bizarre, unworldly juxtaposition of shapes, colours, pipes and scaffolding.
“Yet, it was also important to me to capture the shipyard workers. Walking in I might have expected machismo and aggression but instead I foundwelders, gaffers, sparks and chippies intense and sensitive people intrigued by what I was creating.
“It has been a great privilege to document the extraordinary work of the Scottish shipyards and the character, openness and identity of the people that make everything happen.“
Posted in Exhibitions Archive up to March 2020