An installation of Thomas Jacobi’s ink rubbings taken from the floor of the late Tom Hutcheson's studio in Glasgow. Tom Hutcheson was a member of the Glasgow Art Club.

No-one to see. In the empty studio,
hints of voice and stain, no more. 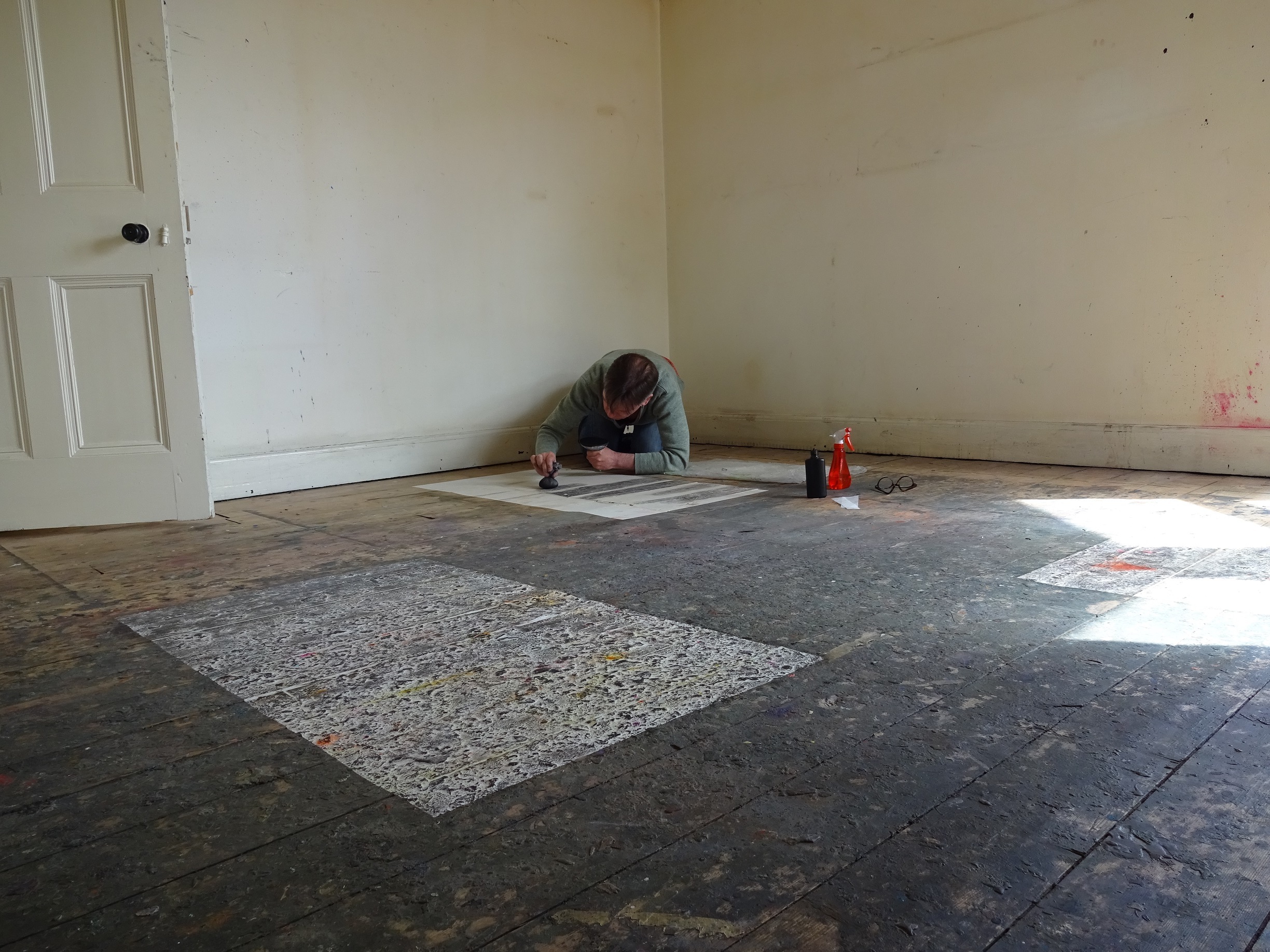 Thomas Jacobi was born in Aachen, Germany in 1959 and completed his studies (painting, drawing, printmaking) at the Academy of Applied Art, Vienna with a Masters degree in 1990. He first travelled to Asia in 1992, and moved to Taiwan in 1993, living and working in Taipei until 1999. He returned to Germany in 2000, living and working in Bad Ems as both artist and curator. While in Germany, he won a scholarship to China (2005). He has exhibited widely both in Taiwan and subsequently in China. He moved to Glasgow in 2009 and has lived here since. That same year he was Artist in Residence and Research Fellow at the China Academy of Arts in Hangzhou, China.

Jacobi’s art draws heavily on traditions associated with eastern cultures: ink rubbing, for instance, although once used by Max Ernst on a rainy day in Normandy, is widely recognised as an important technique with historic associations in Chinese culture. By presenting the floor of a Glasgow artist’s studio as an ink rubbing, Jacobi engages us on a journey towards abstract expressionism of the twentieth century. A lecture he gave in Shanghai in 2012 was titled Think globally, work locally – the artist as wanderer between the cultures. Jacobi is also a furniture restorer – he loves above all to work with wood. Most recently he has collaborated with John Creed on the re-creation of the lamps in the billiard room of Mackintosh’s Willow Tearooms. Jacobi's ink rubbings featured at the Hughson Gallery in November/December 2018. Jacobi has been invited to work on ink rubbings of Chinese elaborate bronzes at the Burrell Collection, Glasgow Museums and his recent works are shown at Burrell at Kelvingrove: Collecting Chinese Treasures. 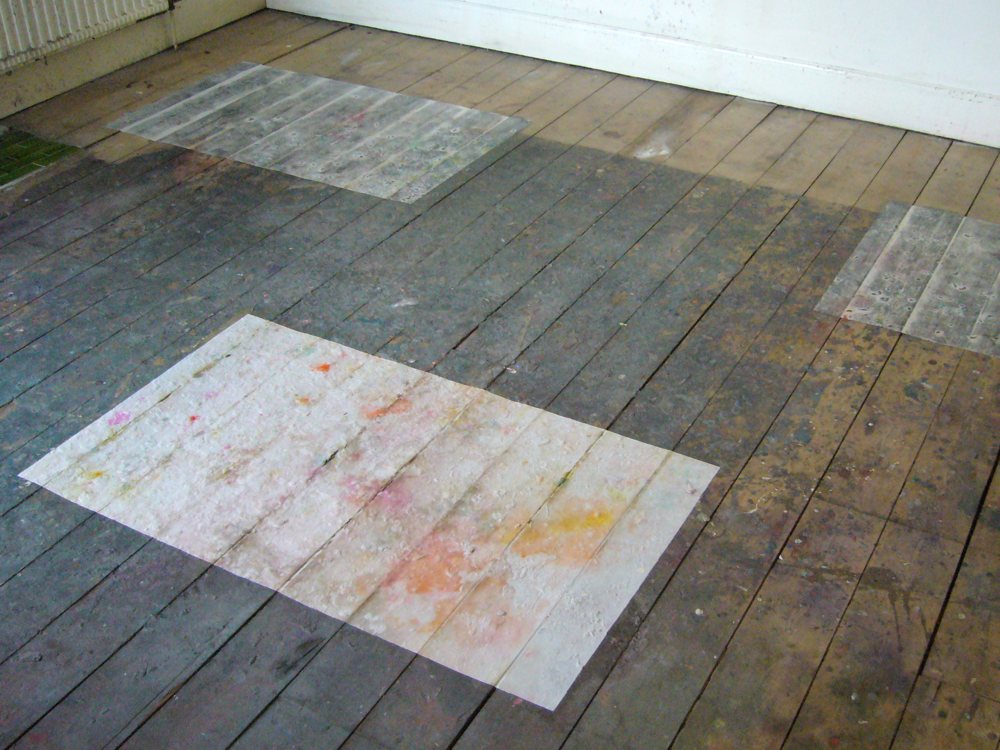 Trained at Glasgow School of Art in the early 1940s his studies were interrupted by service in the RAF. A teacher for all his life he was appointed principal of Jordanhill College in Glasgow in 1977. His work is in many public and private collections at home and abroad, including those of the Queen, arts councils, and the art galleries of Kelvingrove, Detroit, and Puerto Rico. He was a regular exhibitor at the Royal Glasgow Institute, Royal Scottish Academy and Society of Scottish Artists, and was a member of the Glasgow Art Club. 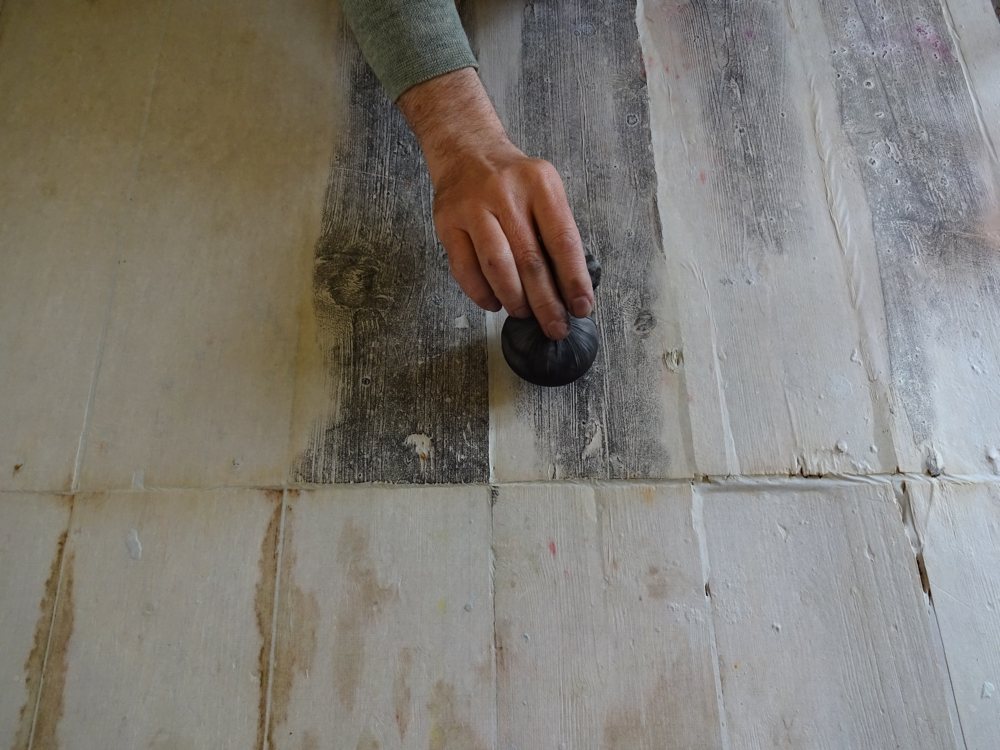 The Art of Chinese Ink Rubbing

First of all, the Chinese paper, especially made for ink rubbings, is wetted and applied to the surface of the object. Tissues and brushes are used to press the paper into the texture of the surface, until all details are covered and the paper starts drying.

Secondly, after the drying is complete, a dabber, made of cotton wool and covered with silk, is blackened with a few drops of Chinese ink and slightly pressed onto the paper. This is repeated like shading a drawing, but with vertical movements of the dabber, until all the details of the texture from underneath are visible.
When the ink is completely dry, the paper with the rubbing can be removed from the object. 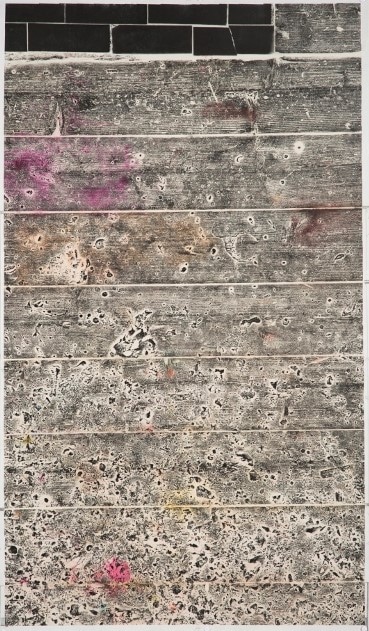 The Art of Ink Rubbing: Thomas Jacobi in conversation with Yupin Chung at the Glasgow Art Club.

Please register via eventbrite if you wish to attend.