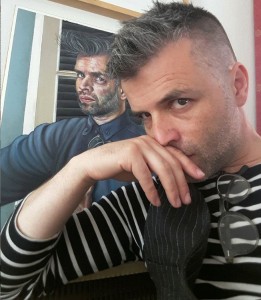 Born in Glasgow 1971, Mark graduated from Edinburgh College of Art in 1993 with a BA Honours in Sculpture and was awarded the RSA John Kinross Scholarship to Florence, Italy.
During a six year stay in the Tuscan capital he worked on several private commissions. He spent three years working with the renowned ‘Il Cesello’, Cipriani family bronze workshop and foundry in Sesto Fiorentino, honing his sculptural modelling skills and technical casting expertise.
On returning to Scotland, Mark continued his artistic practise whilst gaining a Post Graduate Certificate of Education from Glasgow University and went on to teach secondary school art for the next 17 years. Since 2005 he has returned to his first love of drawing & painting, using varied techniques in the mediums of oil, watercolours and acrylics.
His figurative compositions often include visual symbolism and narrative. Mark’s stylistic inspiration comes from the rich tradition of figurative art; ranging from Italian art, 20th century European art through to international contemporary painting.
Mark’s portraiture has gained him national and international recognition; his portrait of artist John Byrne was exhibited at the BP Portrait Award in 2014, which showed in the National Portrait Galleries in London and Edinburgh as well as travelling to galleries in Sunderland and Aberystwyth.
In 2017 he was an exhibitor at the Royal Society of Portrait Painters at the Mall Galleries, London. His painting of chef and TV personality Tony Singh was shown at the inaugural Scottish Portrait Awards in Edinburgh 2017. He followed this up with a further shortlisted portrait in 2018, which showed in Edinburgh and Glasgow. 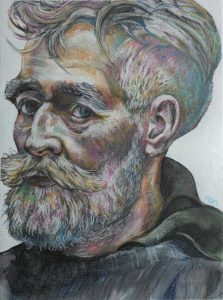 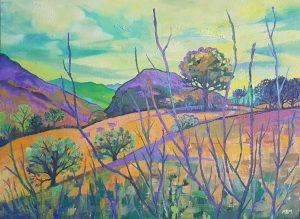