Gregory Rankine graduated from Glasgow School of Art in 1996 and since that time has exhibited in the UK and abroad, including Glasgow, London, Dublin, Limassol and New York. After a six-month residency in Cyprus, he was co-presenter on the BAFTA-nominated SMG television programme, Trout’n About. Rankine won the N.S. Macfarlane Trust Award, Royal Scottish Academy (2007) and the Karl Stern Award for Portraiture, Paisley Art Institute (2017). Rankine’s work is widely collected in the UK, Ireland, France, Finland and the USA including The Woolwich and The Prince’s Trust. Shortlisted for the J.D. Fergusson Travel Award (2005) and the Scottish Portrait Awards (2017), Rankine is a member of Paisley Art Institute.

Keeper Of The Flame 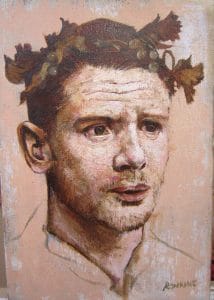